Earth is the third planet from the Sun and the home of humans (Homo sapiens).

After a massive solar flare (with an unprecedented amount of neutrinos) caused the Earth's inner core to heat up its temperature so high, the crust of the Earth became unstable which caused the Earth to come to the end in 2012.

After the apocalypse ended, Earth was flooded completely with 1500 meters of water and all of its continents (except Africa) were destroyed.

When the time was reset to year AD 1, the floodwaters from megatsunamis began to recede and Africa and other continents rose up which are the only landmass on the once beautiful planet.

In 2009, the Earth is seen when the Sun shines on it and is seen to be watched by other planets, including Saturn. The Earth is then hit by a massive solar flare with a huge amount of neutrinos, but its magnetic field protected the planet from the Sun's UV rays. Unfortunately, the core of the Earth was heated up by the neutrinos which were causing a physical reaction and had mutated into a kind of nuclear particle, then suddenly react like microwaves.

The events of 2009, a huge solar flare caused the temperature of the Earth's core to heat up its temperature so high, it would cause the Earth's crust to destabilize. Astrophysicist Dr. Satnam Tsurtani and geologist Dr. Adrian Helmsley discovered this and reported it to the government of the USA that this would cause a chain of natural disasters.

In 2012, the Earth's crust was destabilizing as the Subterranean crust was increasing at a rapid rate much faster than anticipated. The Earth's magnetic fields have decreased by more than 80% within the last 48 hours. With only two days till the 2012 apocalypse begins, the people who were chosen to board the Arks (which were secretly built to ensure humanity survives) evacuated at once.

Soon the apocalypse started on December 21, 2012, several earthquakes of unprecedented strength wrecked several cities all across the globe and volcanoes engulfed areas in several countries around the world, including super-volcanoes. During that day, the sky turned from normal blue to a dusty orange with clouds covering several areas across the globe in the aftermaths of the earthquakes.

The Earth's crust finally began to shift at 1.22 degrees and then, gigantic tsunamis at 1500 meters, triggered by the corresponding quakes, were going to flood the entire planet with several feet of water. The crust had shifted by almost 23 degrees to the southwest and the Earth's poles have reversed their magnetic fields as the South Pole is now in Wisconsin while the North Pole's new location is unknown, possibly somewhere in the Indian Ocean or what was left of the Bay of Bengal.

After the apocalypse ended and time was reset to year 0001, the global floodwaters from the tsunamis started to recede and the entire African continent had risen up, allowing the 2012 survivors to begin a new life there. The Earth is shown from space, showing a new completely different landscape where Africa and other continents have risen. 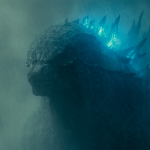